RBass is easily one of Waves’ most talked about plugins and has been since the ‘Type Beat Tutorial’ explosion. One problem I’ve noticed amongst many producers and beatmakers is they grab RBass as a quick fix but don’t actually know how to use RBass. Hopefully, I can solve that issue with this post.

RBass is short for ‘Renaissance Bass’. It’s a bass enhancement plugin created by Waves Audio that has gained a lot of respect and popularity amongst the music production and mixing community.

Page through the RBass Manual (when you have time)

These mixing issues can be fixed with Waves Renaissance Bass.

You can achieve the same result RBass does by using an EQ. Nope, not going to happen with a normal EQ. In fact, this could make things sound worse. The technology, science, and goal behind RBass and EQs aren’t the same.

Online communities centered around mixing and music production can be helpful, but many are filled with people who give vague and inaccurate advice.

I imagine this happens because the people giving the advice don’t really understand how things work and copy what they see others say and do.

Question: “how do I get my bass to translate on smaller speakers or my cell phone”

Somebody will reply with

Bad Answer: “Use Your Ears Bro”

Following advice like that can result in a horrible sounding 808s and mix. No one wants to be the producer with the shitty mix and this brings us to the RBass Tip section of this post.

Let’s start with the basics as your foundational knowledge of the plugin is important before turning knobs and hoping you get a little happy sauce.

How To Use Waves RBass?

Feel free to insert RBass on any sound you’d like to enhance, but for the purpose of this tutorial will be focusing on the 808 basses. If you’re producing Trap or anything currently top 40s, you gotta have great 808s!

Step 1: Insert RBass on your 808 channel

As mentioned above, this can be any sound, just make sure your sound selection is ‘good’. Starting with ‘good sounds’ from the beginning is crucial to your end results. Good sound selection also makes your job as a music producer a lot easier!

Step 2: Find the fundamental frequency of your 808 bass

This can be easily accomplished by using an EQ with an analyzer allowing you to see the frequencies. Most DAWs will come with a stock parametric EQ/analyzer combo.

Dialing in the fundamental frequency is going to give RBass a starting point. The starting point is where the harmonics will be generated from.

When you push the intensity knob you’ll notice that the 808 seems to be louder, this is called perceived loudness. What’s happening is harmonics are being generated from your fundamental frequency’s starting point. The more you push, the more harmonics are generated and the louder the 808 appears to be.

Step 5: Use Your Ear

Now, using the fundamental will definitely give you good results, but sometimes, dialing in around or near the fundamental (being a little off) will give you better results. So use your ears and sweep around the 808s sweet spot.

Quick note: The fundamental is another word for ‘root note’.

This is important because you don’t want to trick your ear with the new loudness. With that being said, level match or gain stage the volume of your bass before and after adding RBass. The meter/levels should be the same or close to the same. Meaning, if your 808 was -16dB before adding Rbass, you want to make sure it’s still at -16dB post processing. 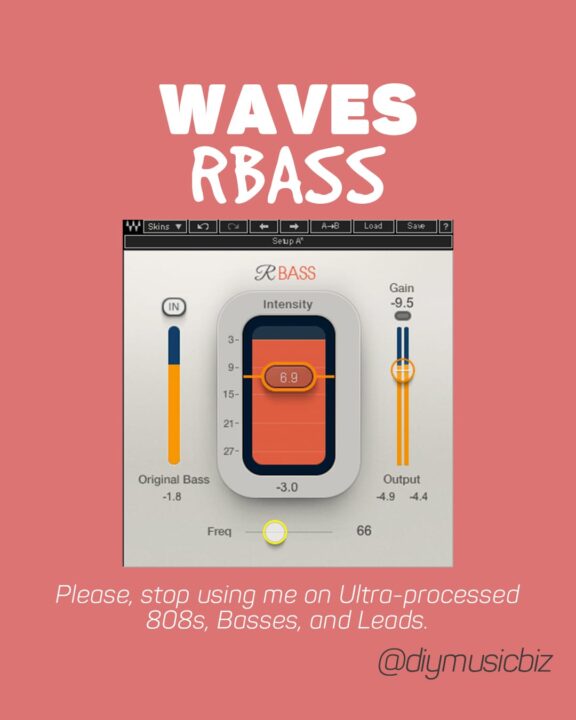 Knowing When To Use RBass

RBass works by replacing the low-end content with ‘harmonics’ allowing the ‘bass’ or low-frequency sound to be heard on both, smaller and cheaper speakers.

Most producers these days, especially those who make EDM, Trap, or some in-between hybrid, are purchasing and pirating sample packs.

Most of the time, the 808s in sample packs are pre-processed and ready to go. The most you’d have to do to them is level and EQ if that.

There are some sample pack creators on platforms like Splice, who offer the dry and processed versions of their sounds. Having the dry version of the sound allows you to tweak and process them the way you want, but again, most will come processed.

Don’t use RBass for the sake of using it or because everyone else does. RBass is great when working with dry sounds or sounds that lack presence. In cases where the 808s (or sounds) have been processed, adding RBass could be overkill and ruin your sound.

There aren’t too many music producers I care to listen to when it comes to production and mixing music, but Focus is definitely one of them. Not just because he’s worked on some of my favorite songs, but he has a good way of explaining his process.

This is rare as a lot of good producers lack the ability to express and articulate, their thought processes and why they do what they do.

That’s how you use Waves RBass in a nutshell. As you can see, it’s a simple, but powerful tool to have in your arsenal. Let me know if there are any other plugins you use or know about that do the same as RBass, more or less.

For more information on Waves and Rbass, head over to Waves Audio

If your music is suffering from poor mixes, it's time to step your game up!