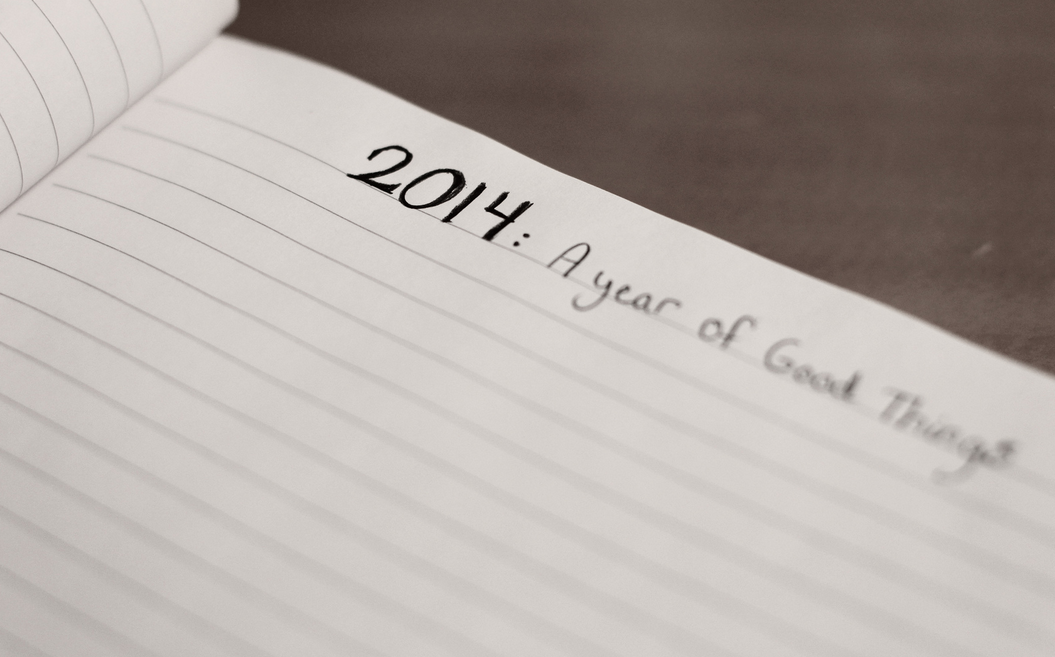 New Years Resolutions! Where are they? Come on share them, don’t be shy. This is the time when everyone decides to finally hit the gym, make better decisions, go back to school and get a degree, or *insert whatever sounds good here*.

For others, they just want to fit in with everyone else. They set goals, and well, that’s where it ends. Then a year passes and they wonder why things aren’t going in their favor. Why they’re still in the same place they were five years ago. Don’t be that person this year, set some goals, outline an action plan and get some stuff done!

Here’s what I’ll be working on

In 2013 my focus was on creating a large number of tracks. I just wanted to pump out a lot of material. I felt if I shot for a high number (like 1000) it would keep me active. It didn’t matter how simple the tracks were, the fact that I was actively doing something made it worth it.

So, I did the whole 1000 track deal – 1000 tracks 365 days. Now, what I didn’t think about was thoroughly categorizing the material. I mean, I did to some extent as far as genre and shows where I felt the music would fit, but I could have done a better job. Most of it doesn’t even have metadata for crying out aloud.

After speaking with different editors and supervisors I found that they have albums full of “go-to” material. So my new aim is to take all my tracks and categorize them into albums that can be easily rifled through.

I need more source material. I find myself having to record from scratch damn near every time I start a new project. I should be at a point where I can rifle through sounds, layer and add a few tweaks, and be done.

At least, that’s where I’d like to be. It’s a lot of work scheduling time to record sources I don’t have access to, recording them, editing, and then organizing them. I love it, but it’s very time-consuming.

I’m thinking 50 new recordings a month → edited, cleaned, and filed should get me on the right path. This will shave hours of time off each project allowing me to complete them much faster than I currently am.

Don’t worry I’m not trying to get all “weight loss fitness buff” on anyone, but It’s something that needs to happen. I need better eating habits. I’ve noticed a significant weight increase this year. Lack of exercise, bad dieting choices → I’m seeing a difference. Oh, and a good friend of mine told me I’m getting fat… that’s always nice to hear.

So, with a strict diet and good exercise, it will be, I’m going to cut down on the unhealthy stuff. I’ve been sucked in by all the late-night infomercials, it’s sad I know.

The goal is to lose 40lbs and tone up

I try not to upgrade my setup much, but it’s happening, and there will be a new workflow for me. Here it goes

Reason 7: Staying in the mix, it’s what I know, it’s what I’ve been using since version 1.0. When I need to get work done (especially on short notice), it’s where I turn. I’ll still use it for creating instrumentals, but not when the project calls for me to use video.

Logic X Pro: I’ve always stayed away from DAWs because of my attention span. It’s hard for me to focus when using them because of the options. There are too many amazing plugins out these days. Everything sounds golden.
Most of the time I find myself doing more experimenting than creating.

Maschine Studio: I’ve been a Maschine fan since before its official release. I had an opportunity to sound design for the unit in 2008 and I’ve been a fan ever since. So, it was only right for me to migrate over to Maschine studio.

That and there’s gear lust seeping through my pores. I’ll mainly be using Maschine whenever I want to work with a pad-based unit or to step outside of the norm. I like working with the hands-on units from time to time, and I feel it’ll be great to use alongside Logic x.

IK Multimedia ARC 2 System: I’ve always wanted to try ARC, but never got around to it. It was also hard finding reviews for the thing and the reviews I did find sucked. Technical babble with no clear answers.

For a while or better yet for the last year I’ve been using Focusrite’s VRM Box. It was small, easy to configure and it was the right price ($99.00). I knew it wouldn’t replace “good monitors”, but it serves as a good grot box.

Site Look: I’m looking to go for a more professional look and feel. I’ve been scoping out some coders to help me with this. I’m a very technical guy, but coding, that’s not a strength of mine. I would like to learn, but It would be much easier to outsource what I’m looking to do.

Podcast: I still want to jump into this. Spent a little time weighing the pros and cons, and what it really boils down to is my fear of keeping the podcast interesting. Let be honest here, I’m not all that interesting. I’m more of an introvert, nerd… hermit….So, there’s that, but what have I really got to lose here?

→ Besides a little time and extra hosting fees?

I’m going to pull the trigger on this idea in February/March for sure.
Hangouts/Video: I want to try to do a little more video this year. Wanted to dive in last year, but there was just no time. I mentioned liking and experimenting with Google Hangouts, that’s definitely going to be “a go” this year

This year I want to dive into some different genres as well as pick up an instrument. I purchased a bass guitar a few months ago. Haven’t been practicing much with it, but I need to, it’s just taking up space in the corner of my room 🙁

I’ll also be focusing more on working with the clients and relationships I’ve built participating in the 90 Day Music Licensing Challenge. There’s still plenty to speak to a negotiate with. Music libraries will still be a part of the game plan, but I want more relationships with people who have the ability to make a decision or that are working close to those who are.

What plans do you have for the New Year?