Maschine Studio vs Mpc Renaissance: Can Akai keep up with Native Instruments? 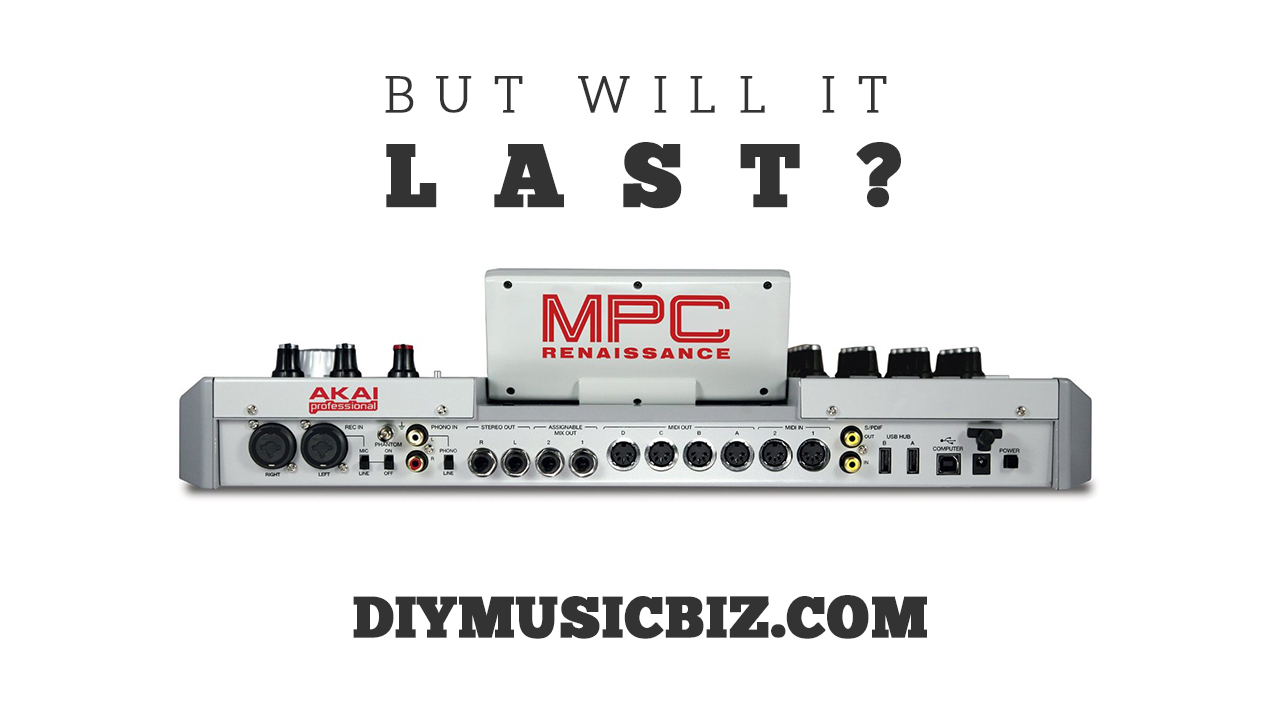 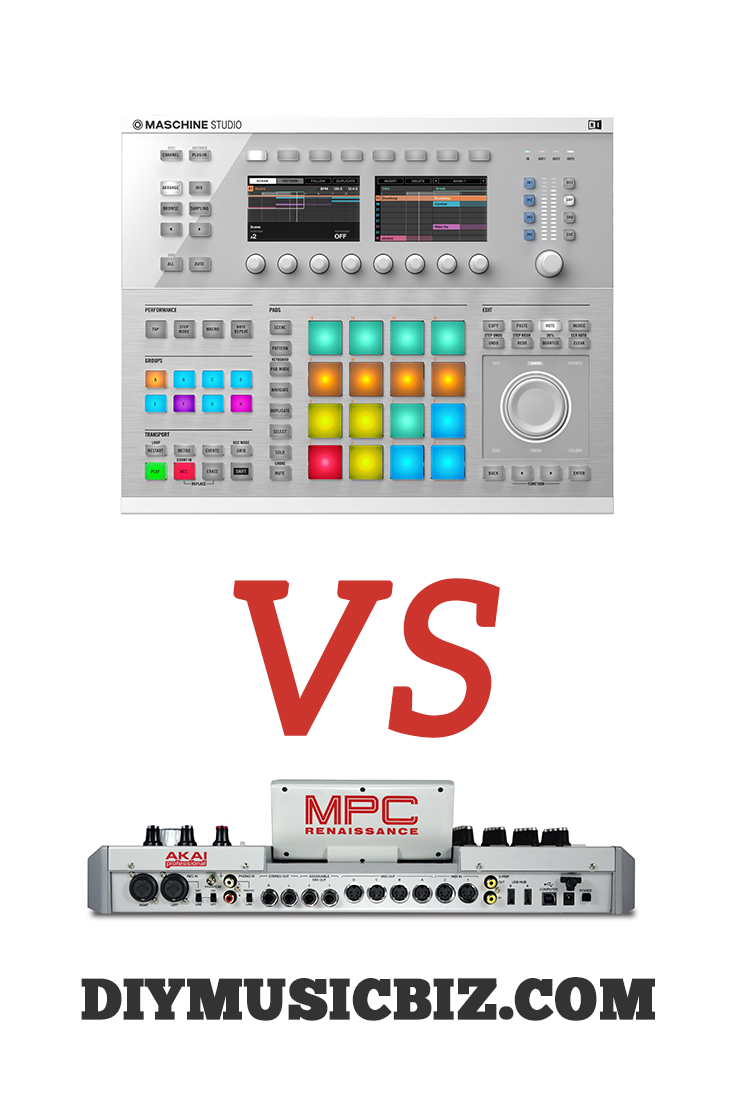 This article is not about features, builds, workflow, sounds, real hip-hop, or your opinion on which is better. This is about competition, longevity and which flagship product will remain king in the end.

Please keep the “fanboy” mentality out of this 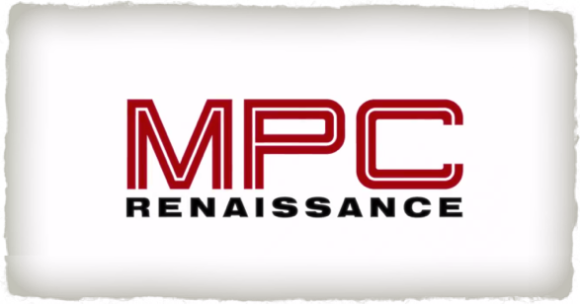 Let’s start with the facts

Akai ‘was’ a force to reckon with. They’ve been known for leaving their mark in the industry dating back to the 60s. In my opinion, Akai began gaining ‘heavy’ traction with the release of their S- Series samplers (S612, S900 S950) those were game-changers. Akai (at the time) didn’t even understand the full potential of their samplers. They were ahead of their time.

“The Mpc Takes The Stage”

These units set the standard for drum machines in their day. Before it was adopted by hip-hop producers it was used as a loop machine for country artists. This allowed them to write without the need for a live drummer. Once it was adopted by urban producers and a few big studies, the popularity opened the gates and spread like wildfire.

Akai road the success to the bank dropping new Mpc models every few years. When it came to sampling drum machines, Akai had it locked DOWN!

What people loved about these units was the sound, build, quantize, and sampling/chopping ability. IMO they owe the chopping credit to Propellerheads – RECYCLE. They set the bar for that.

So what went wrong?

They had a major flaw – SOFTWARE/QUALITY CONTROL

I don’t know if it’s a curse or just part of the “Akai Way”. They’ve always had horrible software and took forever to fix anything. Sometimes they’d release a brand new model before fixing the previous model’s bugs. Does anyone remember the Mpc 1000? The 1000 and 2500 would have died if it weren’t for the JJOS.

Speaking of the Mpc 1000, how long did it take for them to fix the pads? Seriously, we were relying on 3rd party companies to cater to our needs. That’s a quality control issue, should have never been a continuous issue.

Things like this leave a bad taste in the mouths of clients.

They weren’t paying attention! Rather than focusing on where technology was moving, they focused on faster units, more ram, more space, etc. Basically, supped-up versions of what they already had

Then, there was the financial crisis, which set them back a bit. This allowed a competitor to come in and take the show. 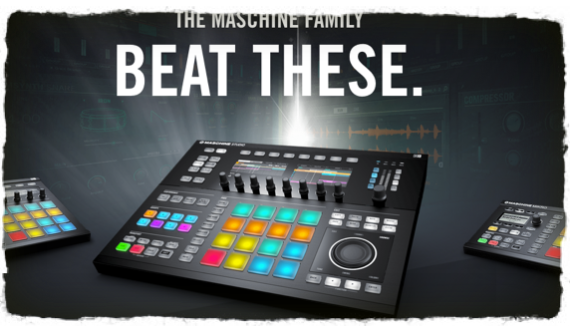 In 2008 I was offered a sound designing gig (with NI). Signed my NDA and was sent an outline of what would be the world’s next big flagship production tool – Maschine. When I saw Maschine’s outline, I was excited and told NI, “you need to make sure you get the pads right”

At this time, I didn’t know their angle. This wasn’t the 1st time a company mimicked the Mpc, but it was the 1st company to be successful at it.

“What Native Instruments Did Right”

They capitalized on Akai’s situation. They took everything that made the Mpc great and made it modern – That simple!

They did what Akai neglected to do, and bridged the gap and since Akai wasn’t responding, lots of industry professionals flocked.

“Akai Finally Fires Back With The Mpc Renaissance”

Wow, didn’t see this coming, but when I heard about it I expected to see a WAR. To me, it was like seeing George Forman step back in the ring to show everyone who daddy was and why he’s still king – that didn’t happen

Akai had everything they needed to dominate but failed to execute. NI has done everything. They’ve taken the guesswork out of the equation, leaving a clear blueprint of what works, what doesn’t, what could/needs to be done.

Akai reverted back to its motto – not paying attention.

Akai Releases Renaissance – It’s a solid unit with a great build like the Mpc 3000, but hybrid (like a maschine). Seems good, but there are issues. It’s bug-ridden! I know, nothing is perfect, but we’re talking about a company known for software issues. I expected a release with fewer bugs.

I expected them to show us “we’re different these days”

They saw what Maschine went through, they knew what to do, but didn’t. I remember seeing videos of Akai’s staff talking about how hard they worked on the pads, getting to trigger right, etc. Um, Roger Linn gave you a blueprint for that (Mpc 60/3000)! Maybe I’m missing something?

Now, let’s look at how each company went about marketing its product.

“The Marketing Of Akai’s Mpc Renaissance”

Their Videos – (most) were filled with old school producers (legends): Who hadn’t been relevant in years, pushing a bug-ridden product. The quality was professional (as expected), but the content was subpar at best. People want to see what the unit is capable of on a pro-level, utilizing its features.

Pigeonholed Themselves – They stuck with the hip-hop market. This is a problem because it’s not as diverse or big as the competitors. I don’t know how they planned on taking over by targeting 1 demographic.

Alternative Units – Akai released multiple Mpc’s – Ren, Studio, and the mpc fly. It’s always good to reach the market at different price points, but I mean, didn’t these all come out relatively at the same time? I think they should have come out with the cheaper units 1st then lead into their flagship model. Or worked a more stable flagship then release the smaller units.

Expansion Sounds – I think this could be huge for them if done correctly.

Professionalism – Every video made for Maschine was shot professionally. They made using Maschine look fun, they made it look like the answer and it was.

Open Arms – NI didn’t pigeonhole themselves, they reached out to professionals in multiple genres of music as well as people who had an influence on the social media side of things.

Updates – NI set up marketing campaigns around their updates. If an update was on the way, they made sure there was buzz behind it. They also listened to their customers.

Fail-Proof Plan– NI was already a strong company with a diverse audience. They are known for supplying music creators with some of the best sounds in the industry. Where there was a new sound library/plugin, there were more videos, because it all worked with Maschine. If Maschine were to fail, the sounds would still fly off the racks.

Alternative Units – NI offered the mikro maschine after they saw success with their flagship. Akai took more of a shotgun approach IMO.

Native Instruments has been leading the market with Maschine since 2009

Team Akai Pro – Finally, it looks like they’re getting things up to speed with the 1.5 release. They’ve tackled some important issues, users are finally getting updates and features they’ve been requesting.

Team Native Instruments – Lights a fire on September 29th, building buzz around their update – Maschine Studio 2.0 with a YouTube video. They got the Maschine Studio into the hands of everyone they saw worthy. Bloggers, Vloggers, Industry Professionals, review sites, etc.

They even had select individuals going from studio to studio to teach people how to use Maschine Studio. Then released it Nov 1st, 2013. Some were able to get it a little earlier 🙂 – Their marketing was crazy

People are on EDGE about Maschine. Seriously, there are more people searching for Maschine than Akai’s Mpc. This is data pulled from “Exact” searches. Meaning people are searching for this phrase in its “exact” form 70,000+ times a month – that’s huge

Maschine trends better even without the release of the studio as you can see from the data. “Maschine Studio” will easily reap the benefits of “maschine” as it’s the brand name of the product. 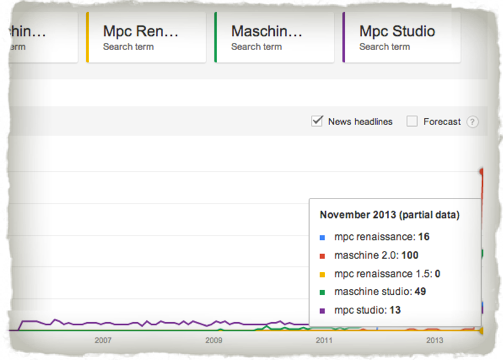 So, my question is, all biased opinions aside, where do you see Akai’s Mpc series heading? I love the company, but in order to win this or keep up they’re going to have to step it up – What do you think? 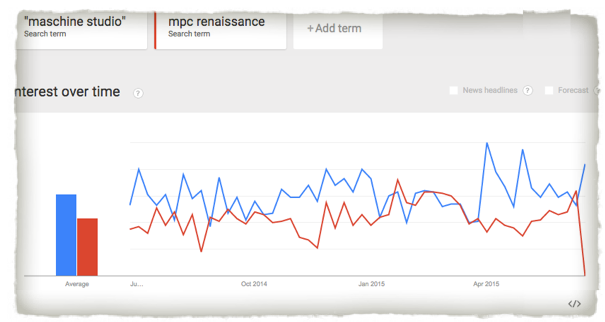 as you can see Mpc Ren is trending done in June while Maschine Studio is rising. This data was pulled June displays June -14th – June 20th (partials) Click here to track

This data is averaged on a monthly basis. More people are searching for Maschine studio over the Mpc. Compare this with the search comps pulled in 2013 (up above).

Which Production Unit Do You Own?

I’m always interested in knowing which unit my readers own or are considering purchasing. 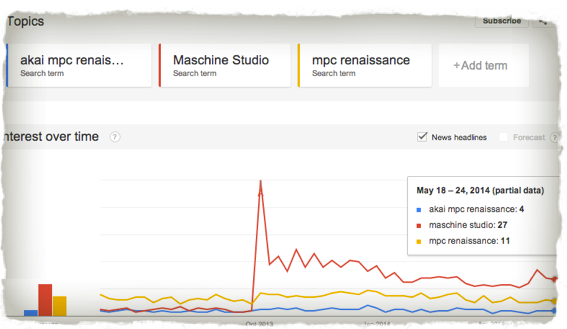 These are the numbers from October 2013 – May 24th, 2014 and as you can see, the interest is heavily weighted for Maschine Studio. Why am I displaying these numbers? Because it gives a glimpse of where the market’s interest is. People search for gear when they’re considering purchasing it.

Mpc Renaissance Sound Expansions
I’ll admit, I’m not regular on the Akai Pro site, so I’m not sure when these expansions surfaced. I know a few were there last year, but I’m seeing some new ones (new to me)

There are some others and I notice that Akai is promoting Loopmasters Sound Expansions. I don’t know if they are 3rd party created or in-house. Maybe the word Loopmasters is a sub-branding of their sound expansions?

Hopefully, they add some audio demos because I see a few titles I’m interested in.

As I’ve stated earlier in this post, Native Instruments made a wise move by allowing Maschine to accept plugins. Since the release of Maschine Studio, NI has released great supporting products that integrate nicely with Maschine.

I’m not too excited with IMaschine, because there isn’t any Android support :(. Yes, I’m one of those droid guys. The expansion banks, on the other hand, I’m all over them.

Both companies are utilizing video to the fullest. Before Akai was a little more focused on featuring older hip-hop producers. Now, it looks as if they’re slowly incorporating a more diverse group of musicians/producers for their videos.

Still not as diverse as NI, but heading in the right direction.

Native Instruments creates videos around all of their products and because of their unique position, anything they market (sound-wise) doubles as an expansion for the Maschine.

Another thing I notice is with their videos is NI’s ability to display togetherness and ease of use. They show you how simple their products are to use and a little of the “how it all comes together”.

Take a look at their new I-Maschine videos

NI’s videos also go into a little back story of how the artist is using Maschine etc.

And again, they don’t pigeonhole themselves into one genre or demographic.

1.7 Update: Early 2014 Akai brings 1.7 (beta) to Namm: Would have been nice to see something final, but at least they are keeping things in motion. It’ll definitely be on my radar.

1.8 Update: Most are sample editing/record updates.