Tuesday, January 14th, 12:24 am, my phone vibrates loudly waking me up from my sleep. I look over at the phone and notice it’s on my aluminum trash can. I then pick up the phone wondering “who texts at this time?” as I’m squinting at the screen.
Turns out, it was an email from a client, one I’d been waiting for since Friday of last week. The client tells me “hey, we love the work you’ve presented, payment will be processed … blah blah 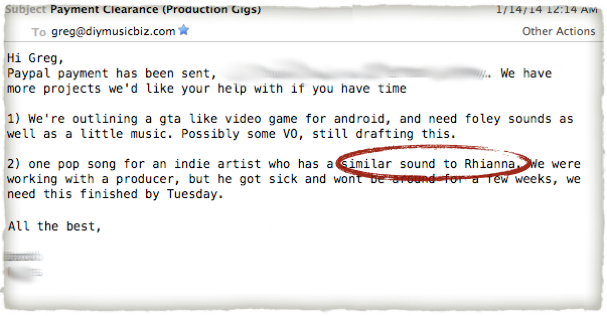 Cool, I love reading emails like that, but what’s even better was being told “we need help with 2 more projects” ← more work. I was really thrilled about being offered these projects but had to pass on one of them. Can you guess which one? Click to vote (before reading through) → Pop Single or Game Audio, results should be interesting.

Why I Passed Up A High Paying Project

1) My Hearts Not Going To Be In It

The project isn’t a good fit for me. I’ve always had a difficult time working with artists. I like to create what I want, when I want, and be done. Even when I worked with artists in the past, I would just create the instrumental, and pass it over to the main producer and let them deal with the rest. I was never above taking partial writers credit, giving up credit, or doing the work-for-hire thing.

2) An Obligation To My Members

On my membership page, I offer “paid projects” meaning I often hand down work I don’t like doing myself, can’t do, or can’t fit in. I’d rather pass the project along to someone who can deliver vs passing on the opportunity altogether. This will knock out two birds with one stone.

1) → It’ll make the client happy.
2) → It’ll put money in someone’s pocket, might even be a strong connection that leads to more work in the future. I don’t ask for a cut, writer’s credit, or finders fee, it’s a win-win for all.

3) I Enjoy Helping Others

I thought in order to do anything you had to work with a label or have a manager to pitch your material. Everyone told me to shake hands at Music Industry conferences and different types of conventions. I didn’t have money for that. And remember, this was before the internet took off as a way for people (little guys) to market themselves.

People were doing it, but it wasn’t that popular nor did it generate the returns like it does today. There was no market to market to like there is now. The internet (then) was better for video games and chat boards. 56K SUCKED! So I continued saving money for gear and eventually purchased a ticket for a convention hosted by GC or BMI. I think they were co-sponsors or something.

Music Industry Conventions (one of my firsts)

Anyway, it was inspiring, but I was still lost. Still didn’t know where to start. The panelist went over a ton of information sharing stories and possibilities, But no one shared anything about actually finding the work. I felt like I wasted $400, it was frustrating.

They pressed strongly on connecting with each other

I wasn’t too happy about that. Yea, let me go connect with the rest of these schmucks who are just as confused (if not more) as I am, that’ll really get me somewhere. I wanted to connect with the panelist, after all, they were the ones making a living doing this stuff.

Anyway, I know some of us only need to get the ball rolling, getting a placement not only puts some money in your pocket, but it’s a boost of confidence, and for a lot of us, that’s what we ‘really’ need.

What Music Gigs Do You Hate?

Would you ever pass a project onto someone else without collecting a fee or taking a cut? Would you just work through the project anyway, even if it were one you weren’t passionate about?

Music:Quality Vs Quantity → Which Is More Important?
Vlogging For Musicians : How To Create Screencasting Videos
Why You Need An Email List